Home / TALISMAN Hire Durban South inspires and gives back to their community!

TALISMAN Hire Durban South inspires and gives back to their community!

By: Bonique
In: Blog
TALISMAN Hire Durban South inspires and gives back to their community! 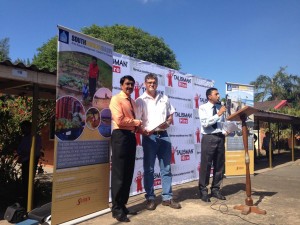 The school competed with 20 other Schools in The South Durban region in a competition that entailed naming a School Safety Notice Board, which will be rolled out to all the schools in the Durban South area.

After Ganges Secondary School was identified as the winning school with their “Wall of Safety” name, Mr Jonck was invited by the South Durban Basin (SDB) Area Bases Management (ABM) Office to address the school at the official price giving ceremony.  The next food tunnel sponsored by TALISMAN Hire Durban South will be erected at the school as a price for the efforts.

The ceremony was addressed by the Head of the SDM ADM Eurakha Singh, as well as Mr Ntuli from the Department of Education Regional office.  Ernest Jonck then took to the stand to address the 1300 pupil strong school and hand the school a Food Tunnel that will grow and reap harvests in a 4M x 9M food tunnel.

The prize is equally important for teaching the scholars how to farm and cultivate vegetables as well as show learners the role farmers paly in the supply chain of the country.  The produce of the tunnel can either be sold to markets to raise funds for the school or handed to under privileged learners.

This is the second food tunnel given to community projects in the South Durban Area as Ernest Jonck handed one to the gardeners of Collingwood School early last month.   It forms part of TALISMAN Hire Durban South efforts to donate a food tunnel a term and have sustainable community development options in teaching people how to fend for themselves in an initiative that produces sustainable results.

2014-04-09
Previous Post: For high-quality chainsaw hire in South Africa, come to TALISMAN Hire!
Next Post: Why it is beneficial to rent an asphalt floor saw rather than to buy one?

Do you want to hire equipment?

TALISMAN IS A PROUD
MEMBER OF

Do you want to hire equipment?

TALISMAN IS A PROUD
MEMBER OF